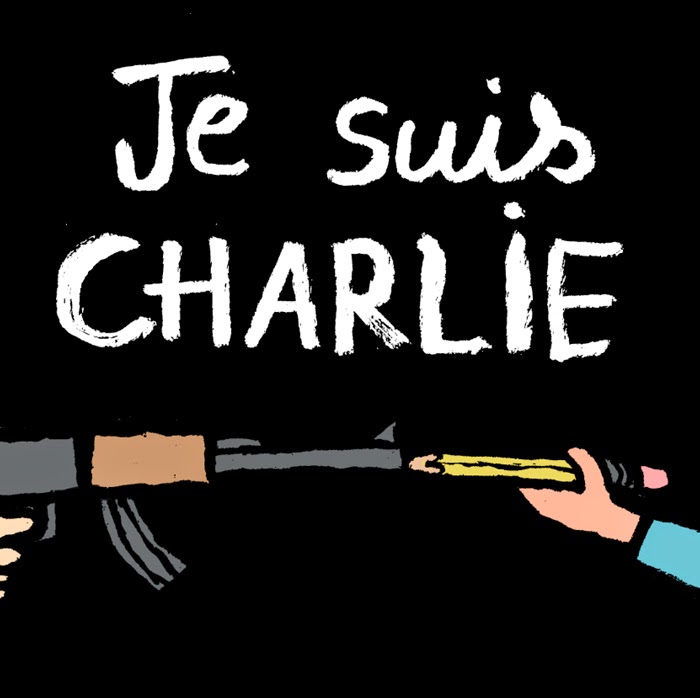 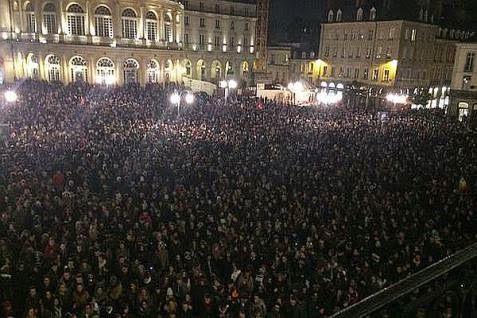 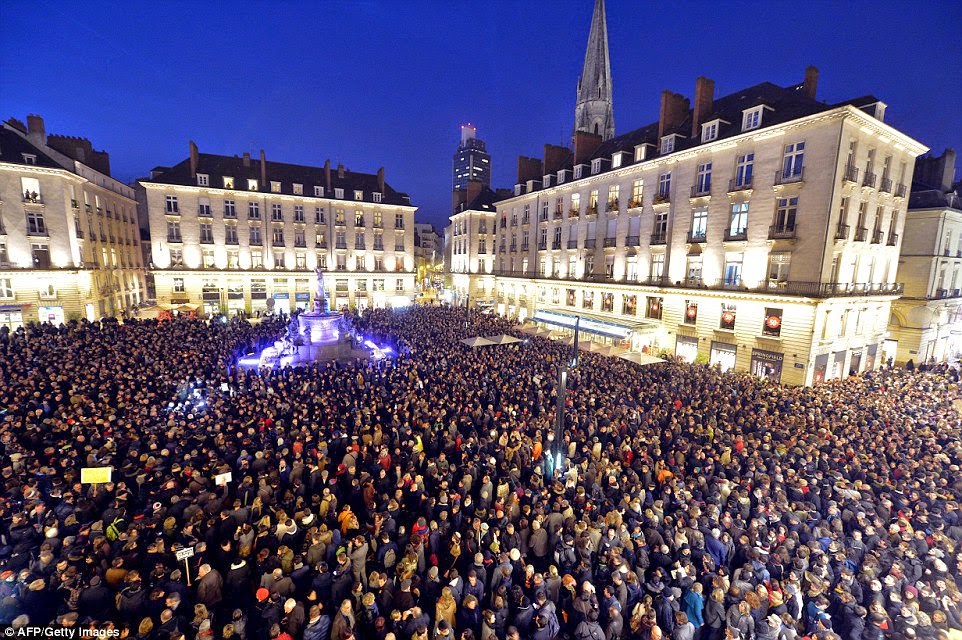 Fanny has been back home now for just over one month.   We had a Skype session with Fanny and her family a few weeks ago and were pleased to hear that she's doing well.   Brooke received Fanny's report card the other day and as expected she did really well in all her classes.  A few of the comments from her teachers were;
"Fanny has been an outstanding drama student. It has been a joy to have Fanny as part of our class." - Drama
"Her work habits and homework are very good." - Canadian History
"Fanny is comfortable speaking in class and has been a delight to teach."Au revoir and bon voyage, Fanny!" - Science 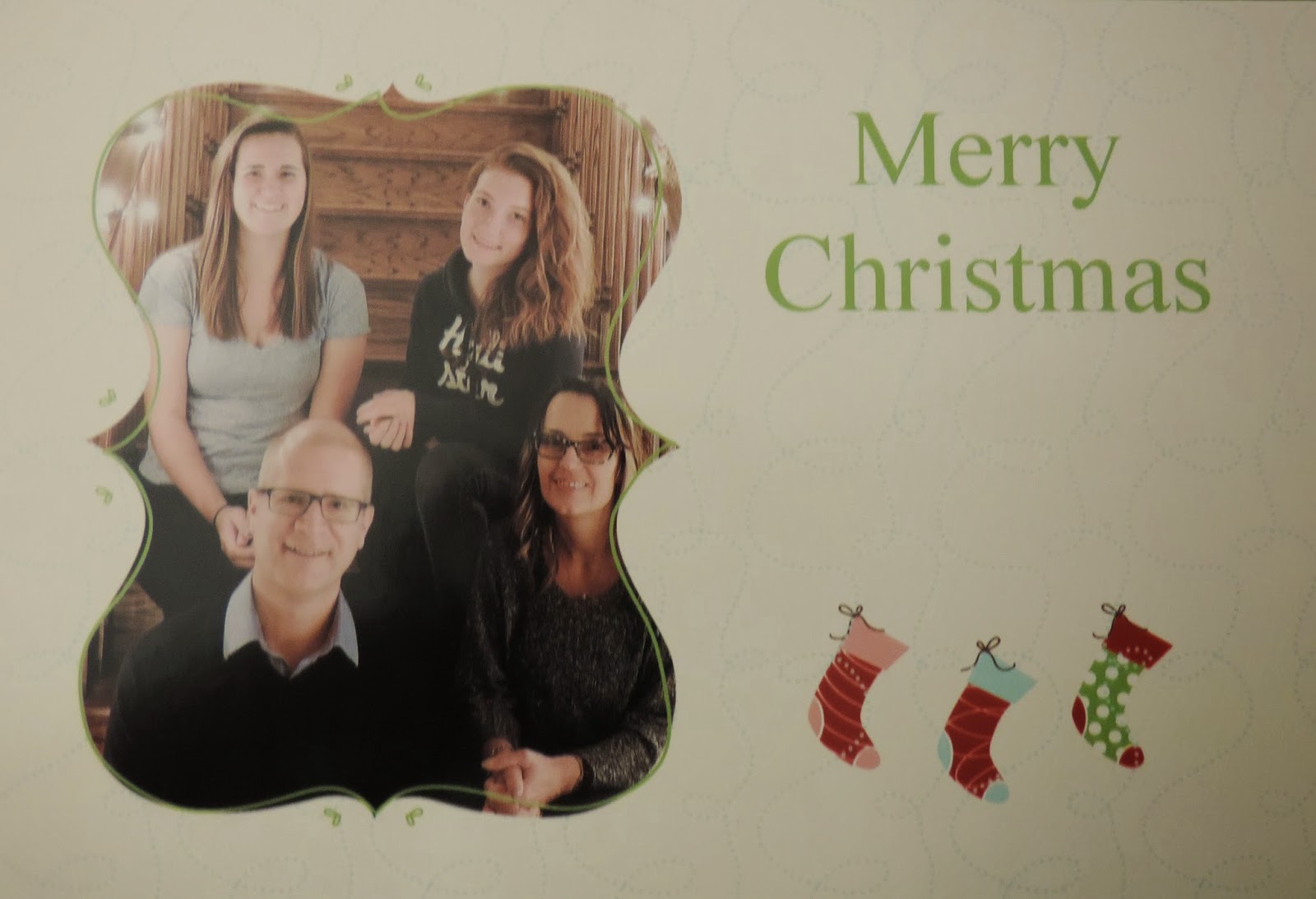 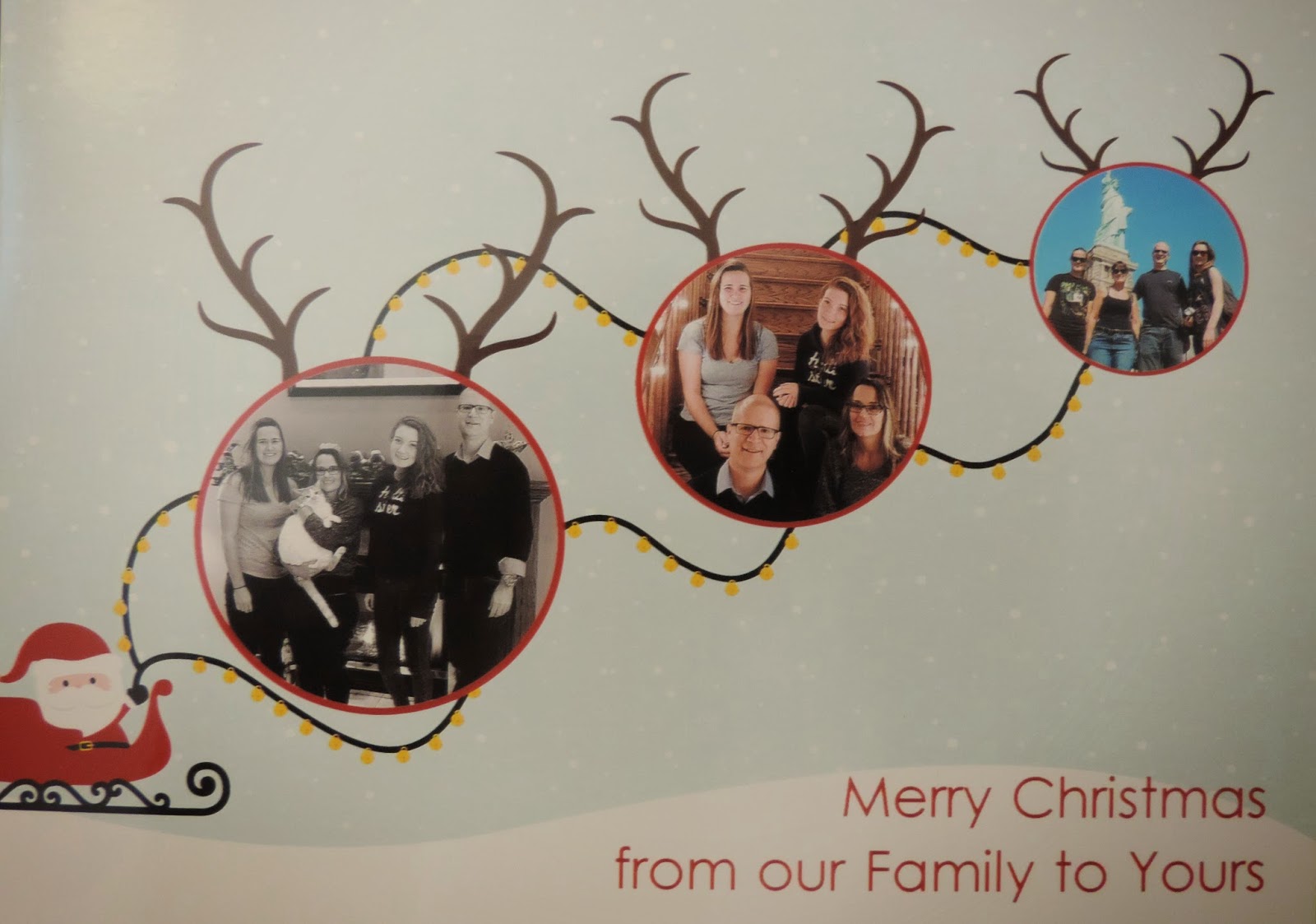 Update:  Brooke and I completed the 3D Eiffel Tower puzzle on December 27th. We had a lot of fun putting it together.  Thanks to the Cools family for the cool gift.

What An Adventure!! Quelle aventure!!!

It seems like only yesterday that Fanny arrived and yet here I sit typing about her last day.    The entire ISE (International Student Exchange)  experience has far exceeded our expectations.    We have gained a life long friend in Fanny and look forward to keeping in touch not only during Brooke's stay in France but for years to come.   Last night during dinner we gave Fanny a card which contained a short letter from Brooke and another letter from Lydia and myself.  In it I talked about how our goal was always to be the best host family we could be and that we hoped that Fanny had enjoyed her time with us as much as we had with her.   I went on to list some of the highlights from her 3 month adventure in Canada of which I took 1886 photos!!

Some or our best memories I told Fanny were of the little things like the first weekend when Lydia and I tried and tried to pronounce her name correctly, how proud Lydia and I were of her when she did well on a test at school, the expression on her face when she first saw Times Square, the look that she would give me when I was asking for just one more photo, the day she came home from school singing our national anthem and just the great conversations we would have about Canada, about life in France and all the laughs we had together.

We'll miss Fanny's smile, her singing, hearing her favourite expressions, " oh my god" or my personal favourite "what the hell" and her easy going personality.

Lydia and Brooke will take Fanny to Toronto later today for her 8:25 departure for Paris.  Fanny is packed and surprisingly considering the amount of shopping she did while in Canada is under weight for her suitcase.  lol

We look forward to Brooke's 3 month adventure in France beginning in mid February and we are confident that Fanny's family will open their home and hearts to Brooke just as we have with Fanny.
Safe travels friend. 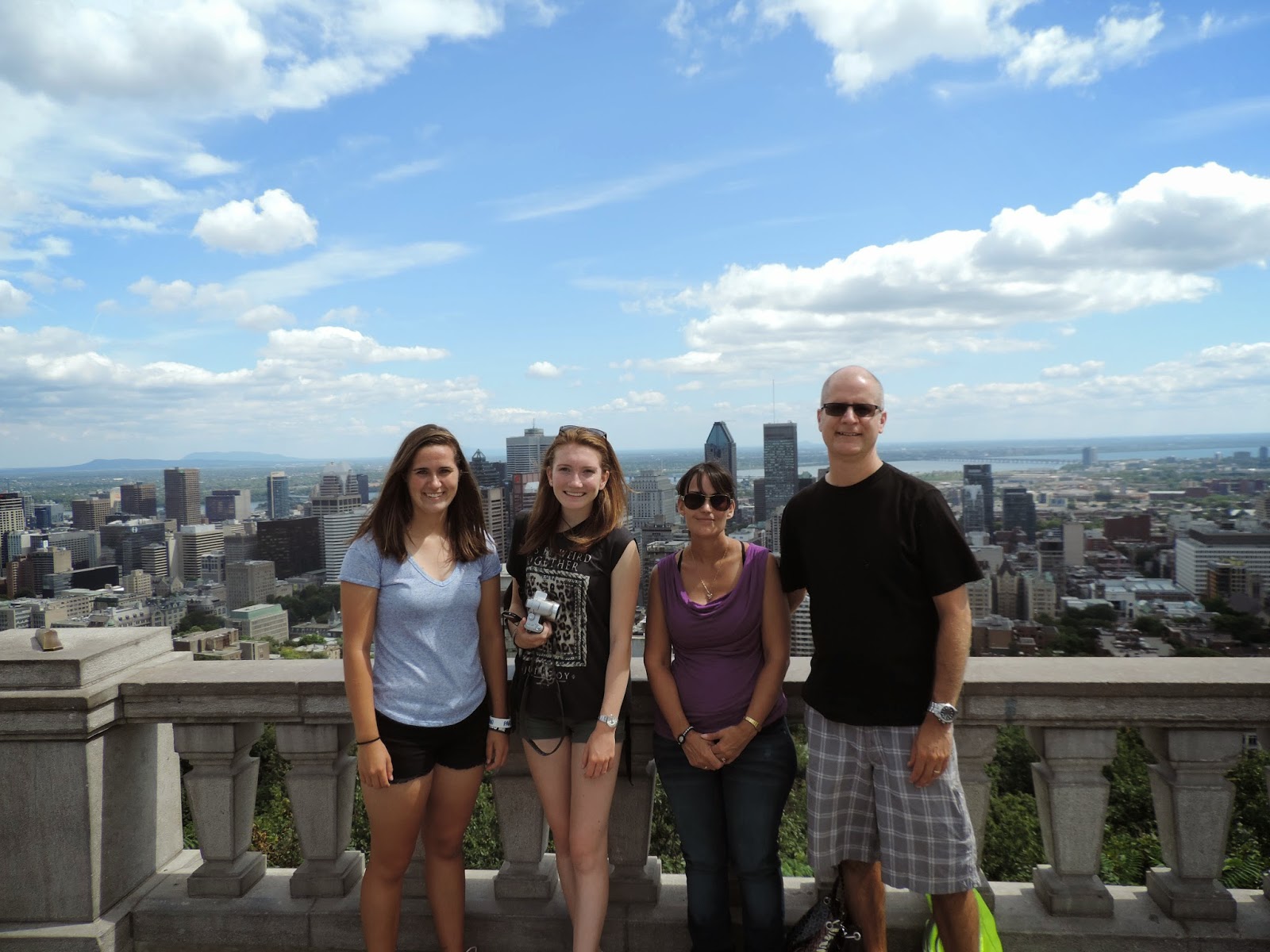 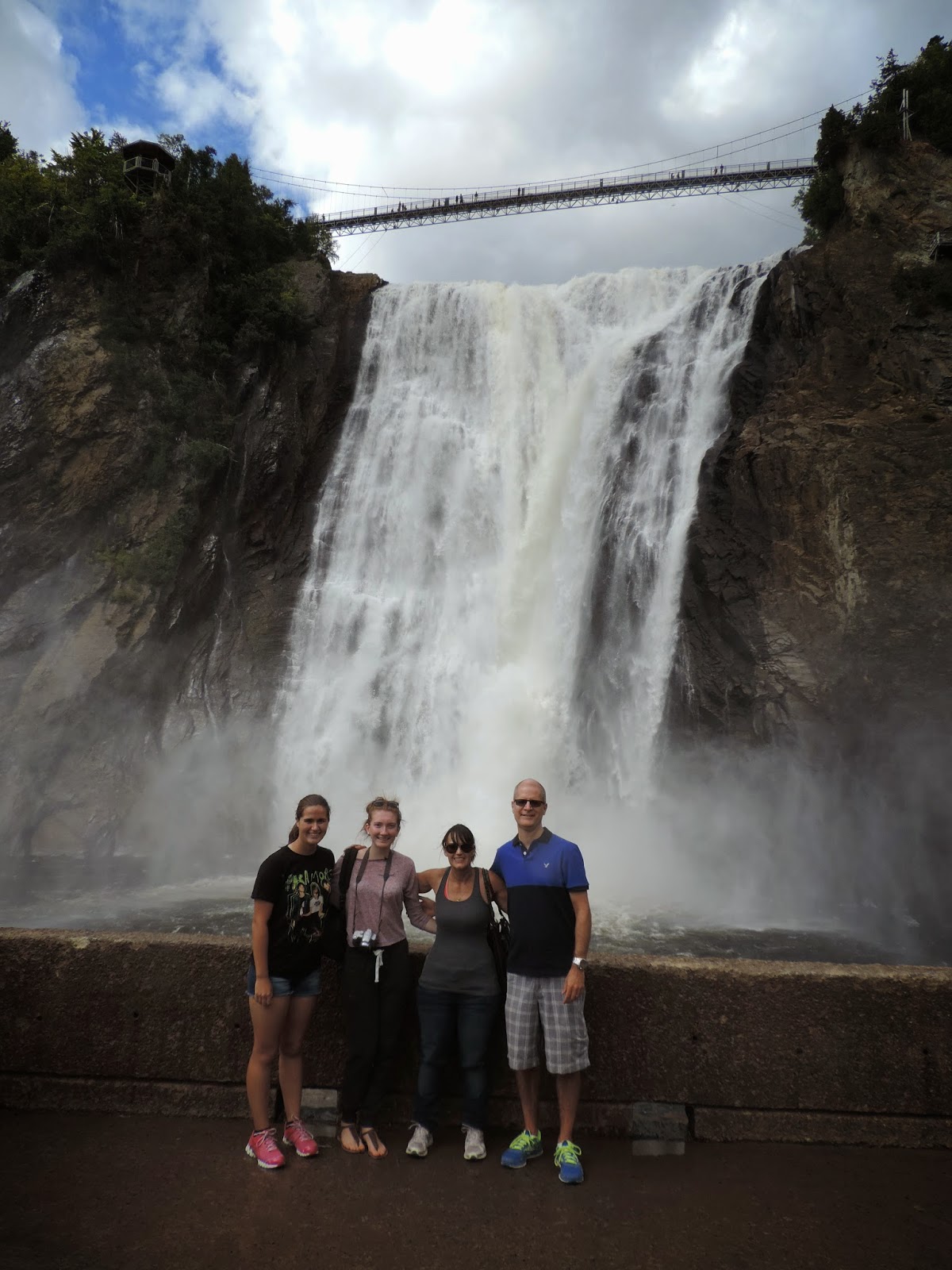 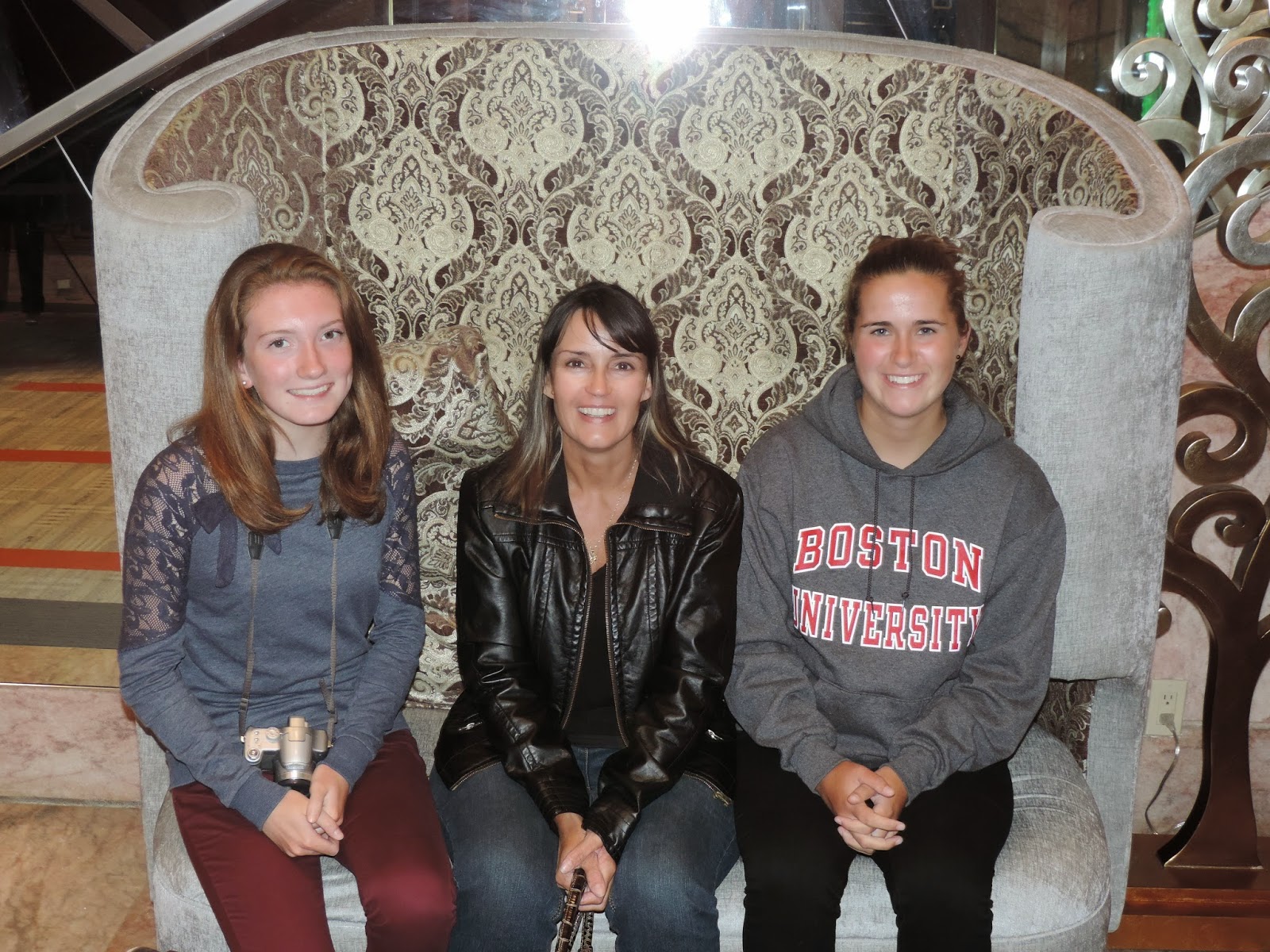 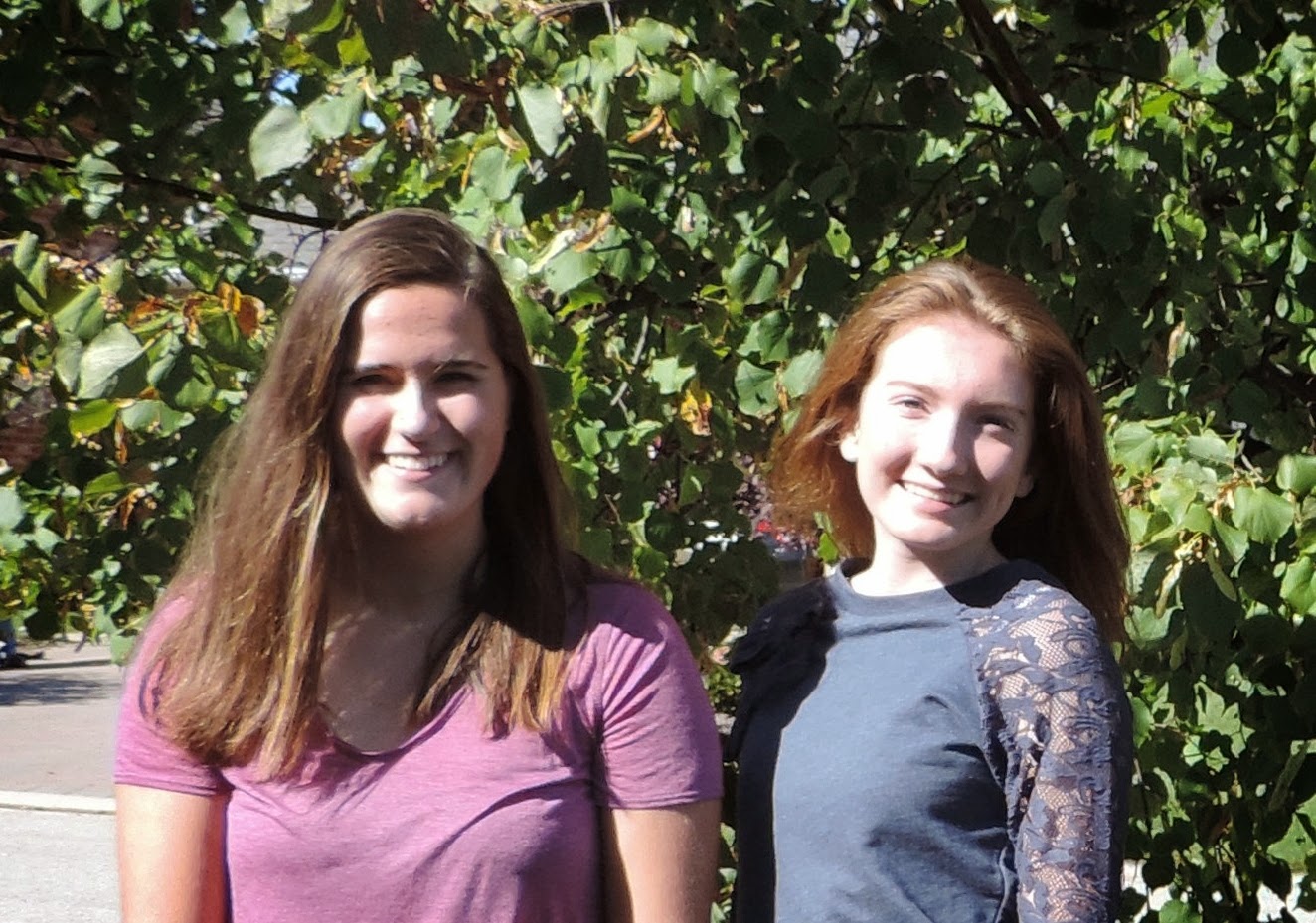 Part 2 of the adventure, Brooke's 3 months in France begins in mid February!!  Check back for updates. 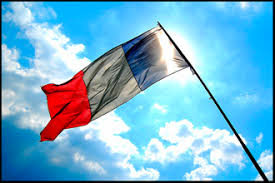 Update:  Found the following on the white board in Fanny's room. 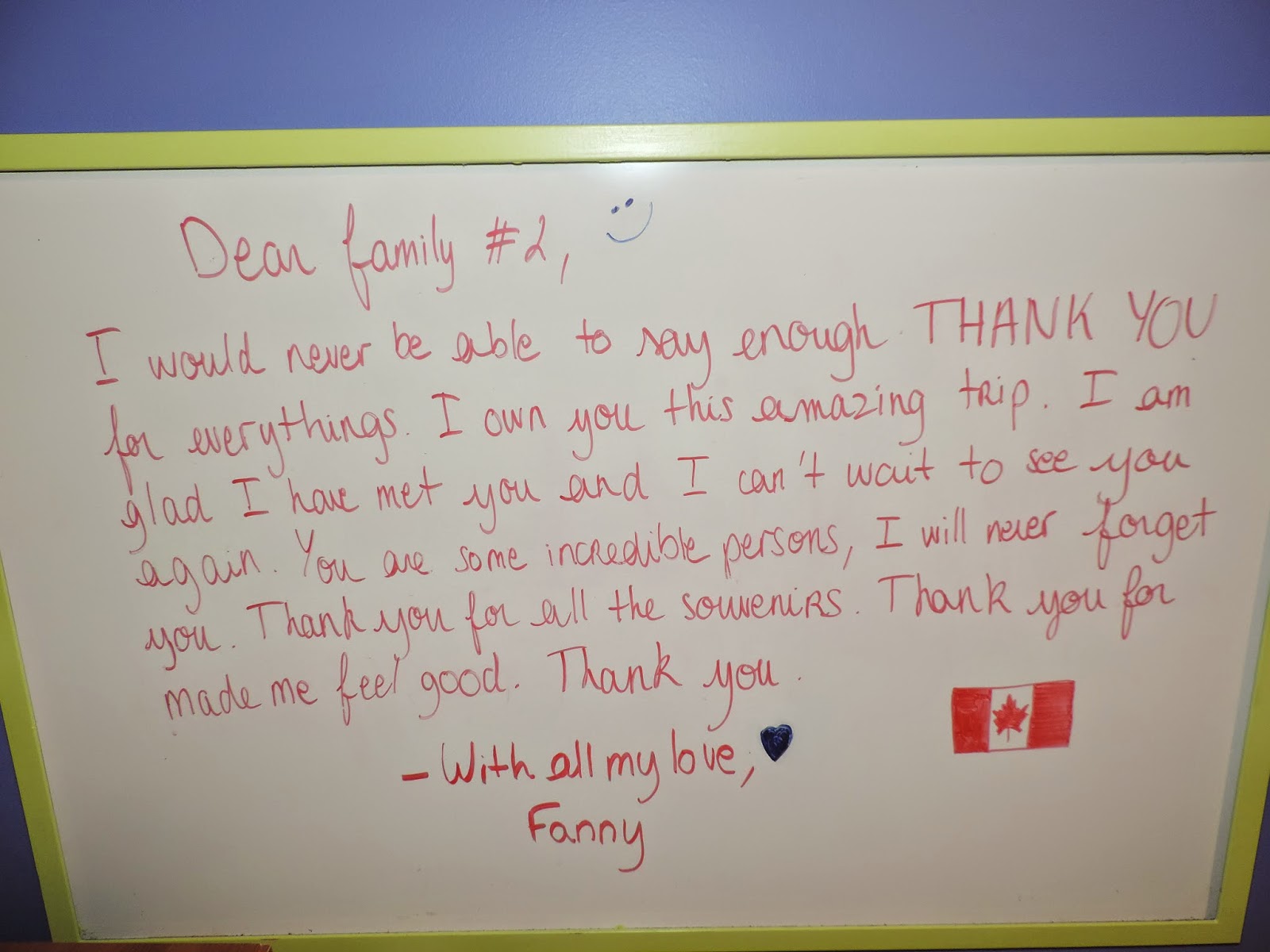 Thursday was Fanny's last day at Medway High School, a tough day for Fanny and all her new friends.   This day was filled with lots of hugs and even a few tears as Fanny said her goodbyes.   Fanny's drama class even held a pizza party in her honour.   When Fanny returned home from school she updated her Facebook status with the following message, "Medway!  Thanks for this amazing last day!   I am gunna miss all of you and I hope to see you again, you are nice persons.  Bye!"   At last check she had over 50 likes and 20+ comments.    I reminded Fanny that although this day was a sad one, she will leave Canada with so many memories and so many new friends.  Friends that she'll be able to keep in touch with through Facebook, Skype, Twitter,. etc.

Before leaving for dinner we took the time to get a few more photos, one of which will become our family Christmas photo this year. Knowing that Fanny loves pasta we went to Spageddy Eddys.  A small unique pasta restaurant in downtown London known for their huge portions.  We ordered and then proceeded to give Fanny a small gift, a Canadian charm bracelet along with a card and a letter from Brooke and Lydia and myself.   There were no tears just plenty of smiles and laughter. 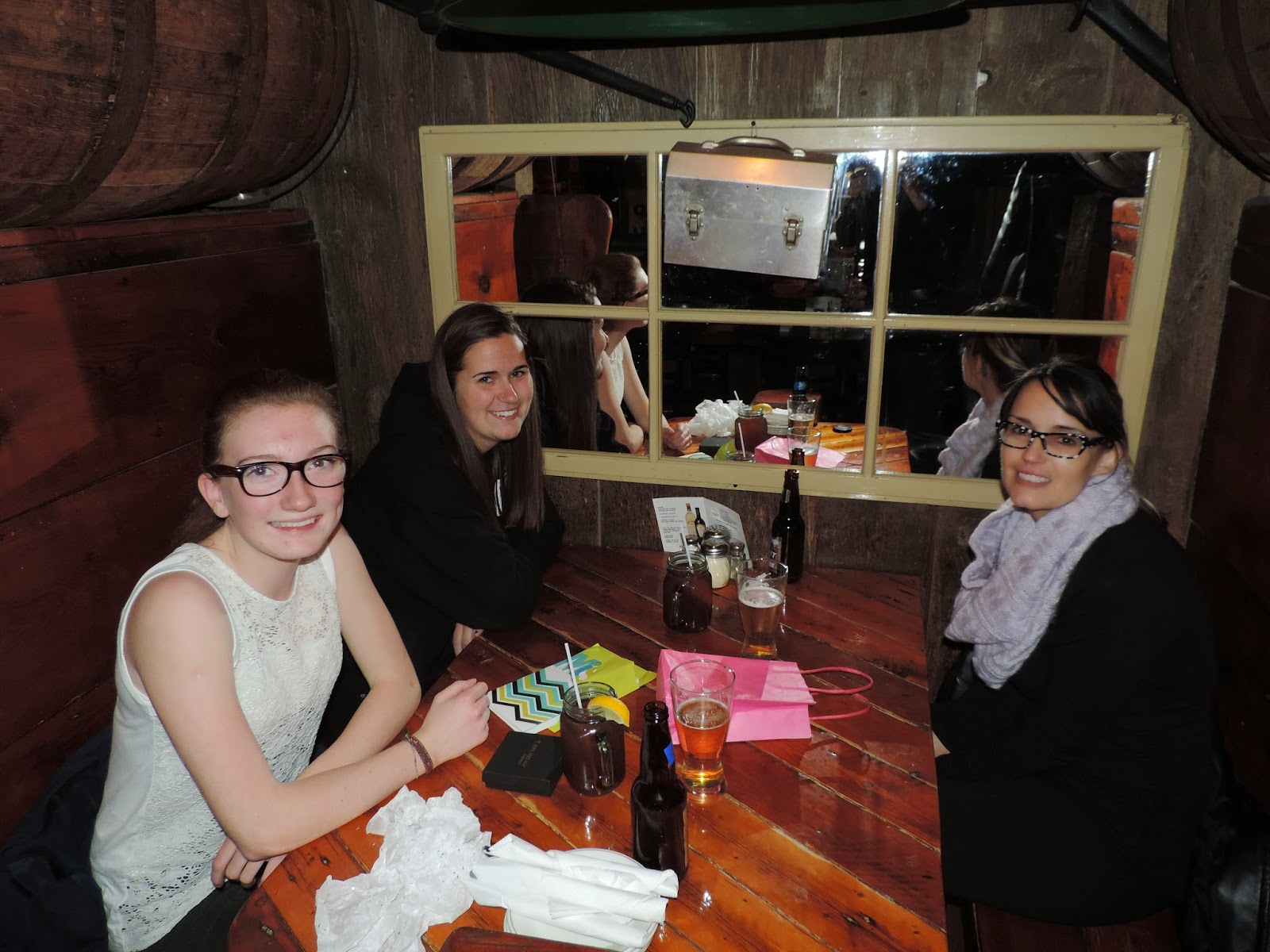 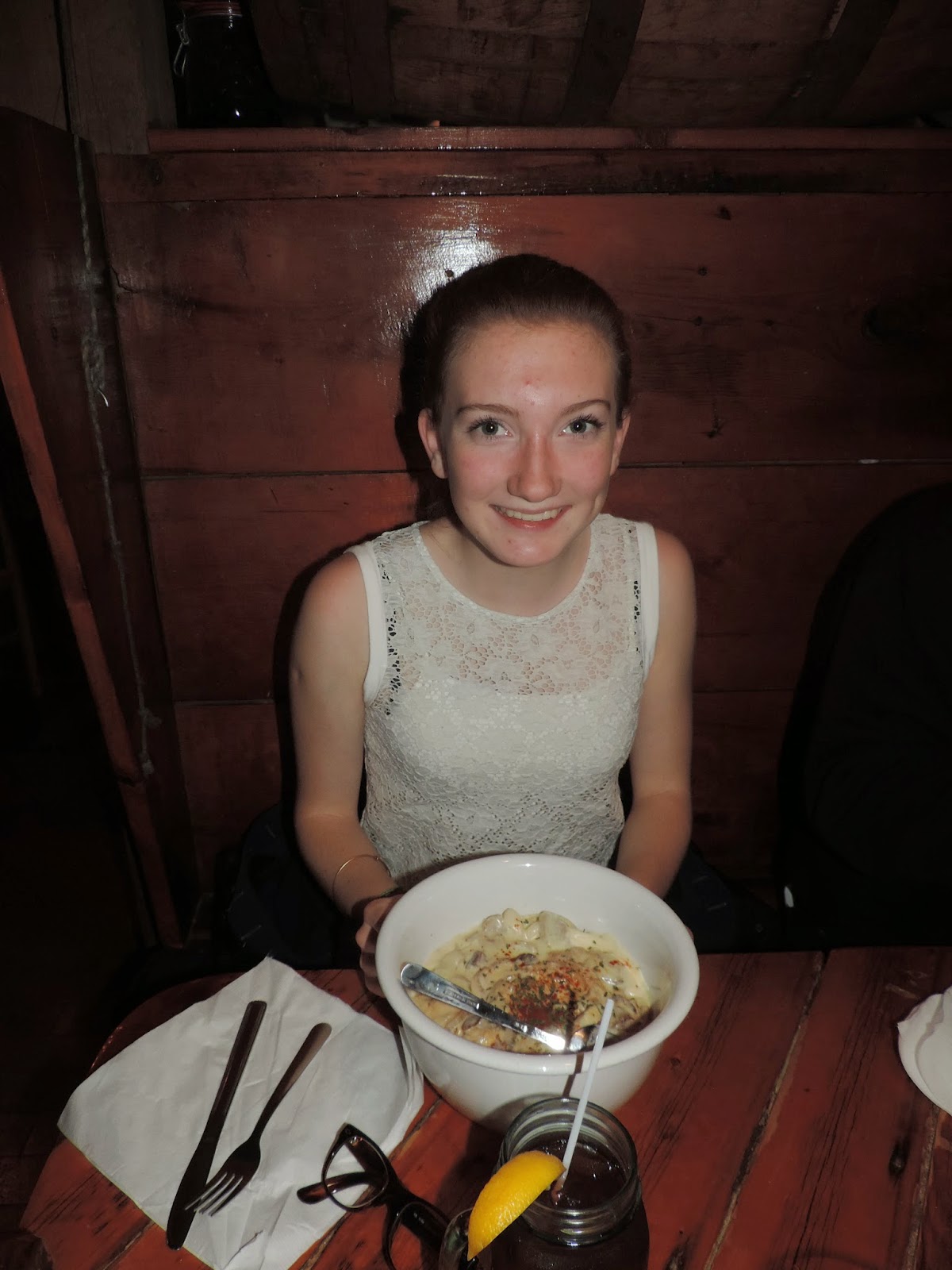 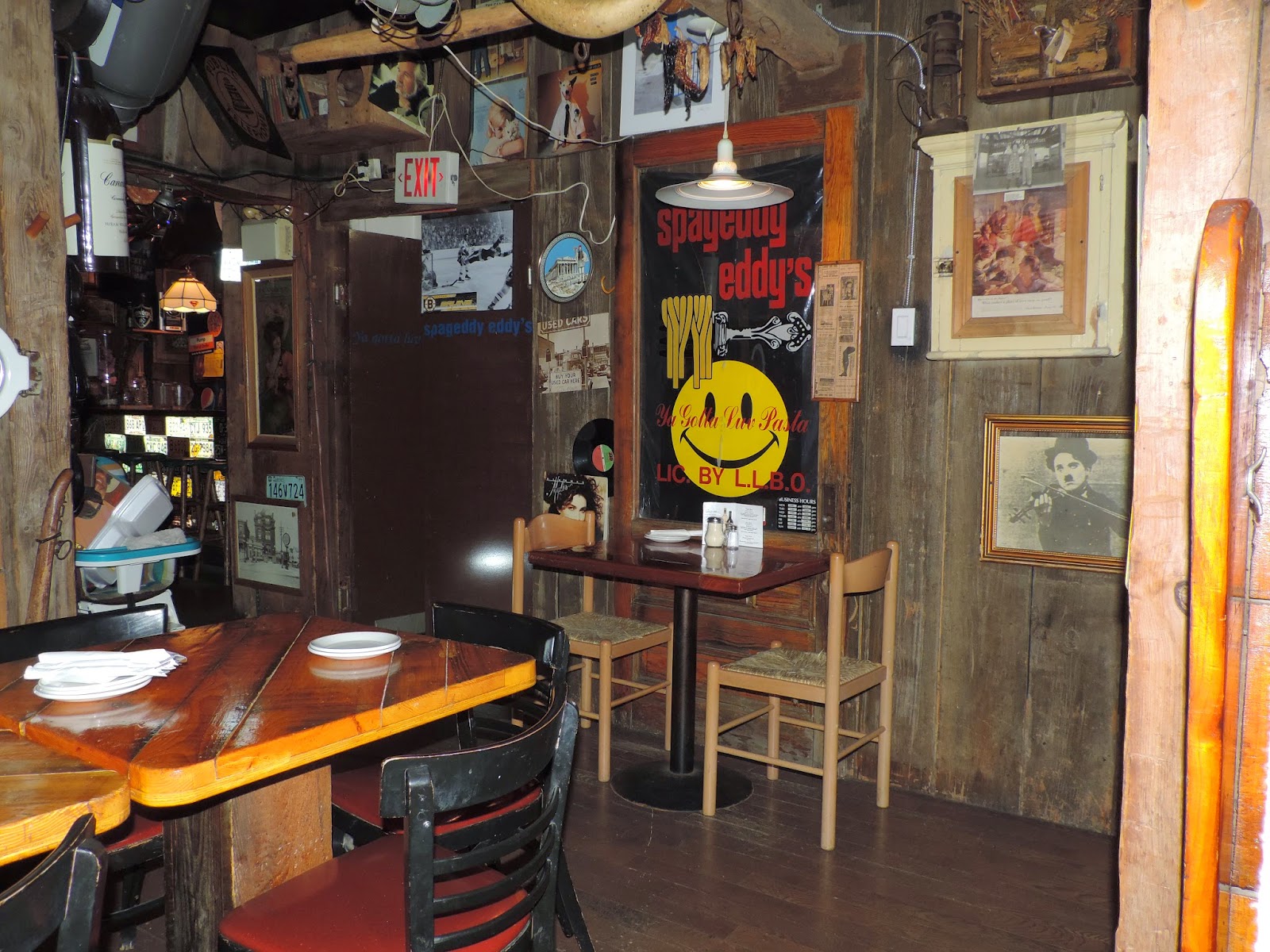 After dinner we went to Fleetway and played a round of Glow In-The Dark Mini Golf.  Lydia kept score and surprisingly also ended up winning??  I want a recount!! 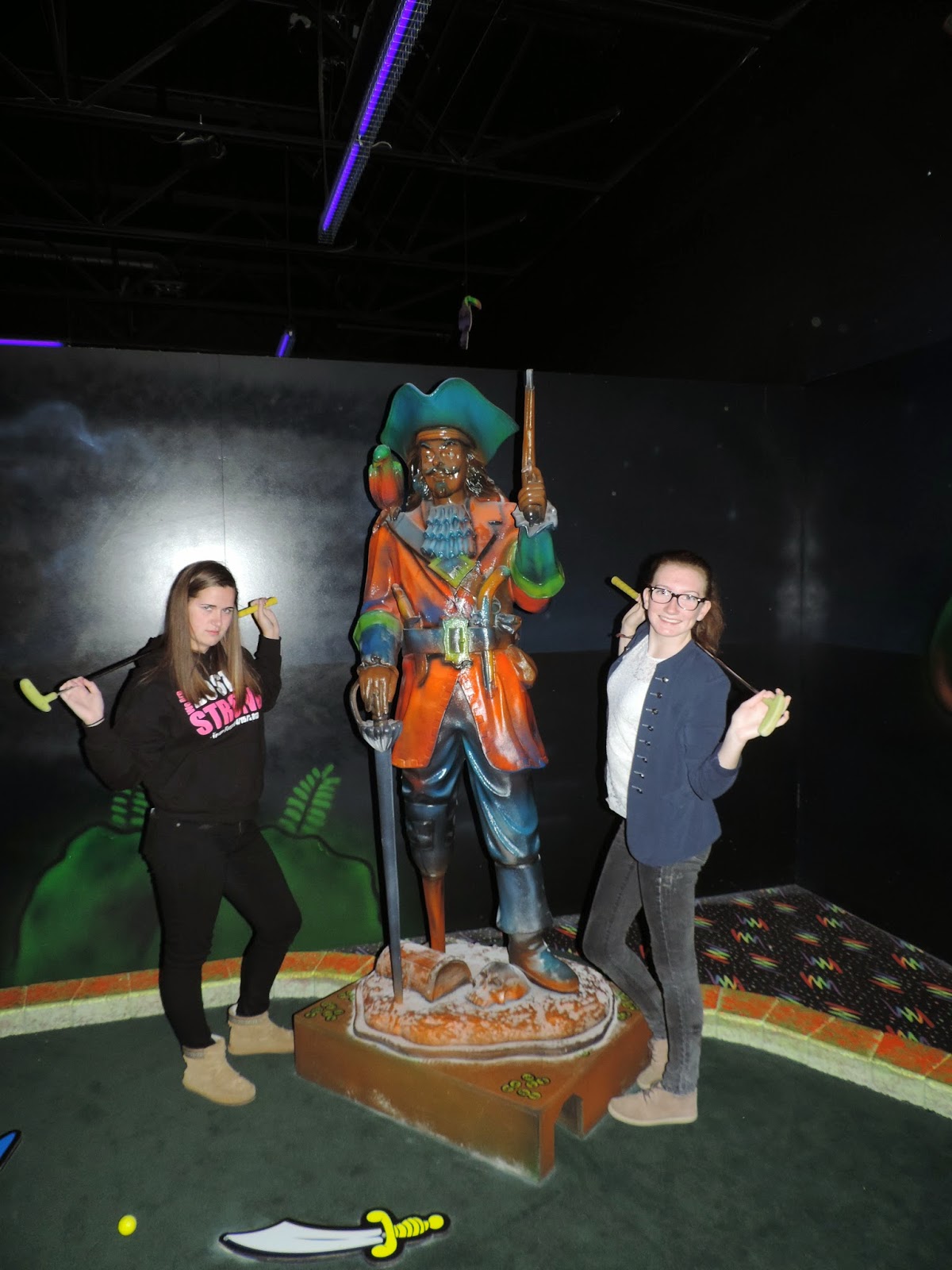 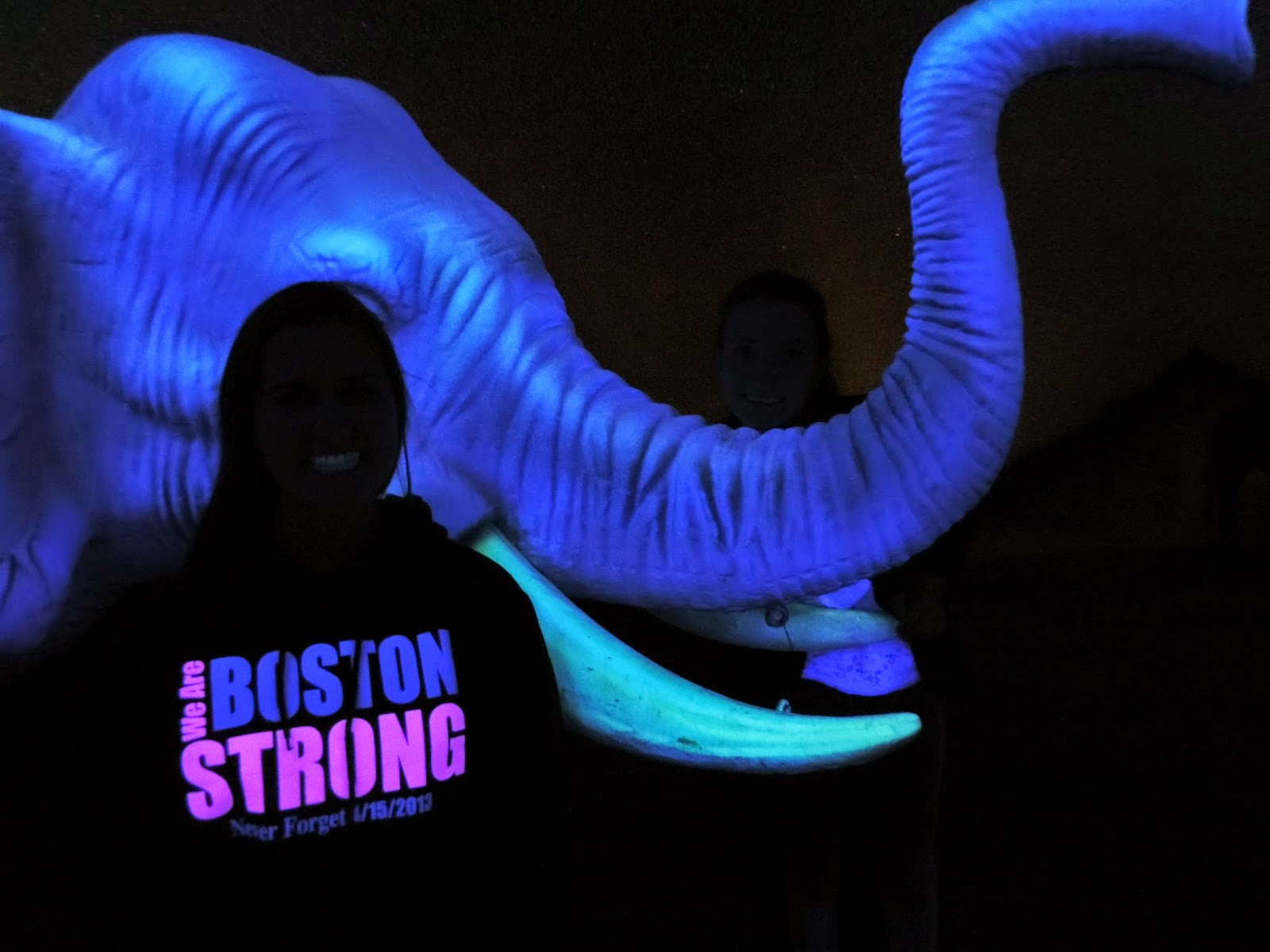 It's a sad day as I write, only 3 days until Fanny leaves for home.   Fanny received a call from her mom, dad and sister today who are all eager to have her home.   With Fanny's help translating I was able to speak with Isabelle and Laurent. They thanked us for hosting Fanny and I thanked them for the opportunity to get to know their daughter.  I told them that we now have a life long friend and that Fanny and her family will always be welcomed in our home.

Fanny's family are excited to have Fanny home but also excited to host Brooke who will be leaving for France in mid February for her 3 month adventure.   Isabelle has also agreed to carry on my blog and will post just has I have while Brooke is in France.

No sooner did we just get over Halloween and already Santa was in town.  The annual London Santa Claus parade was this past weekend and it's a tradition that Lydia and Brooke have had since she was born.   Brooke, Fanny, Amy Zavitz and Lydia went to London Saturday for the parade.   From the looks of the pictures, the girls had fun. 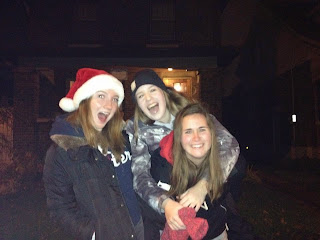 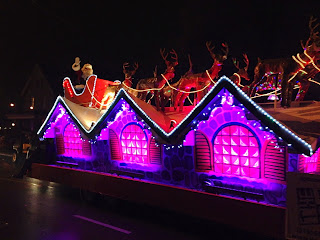 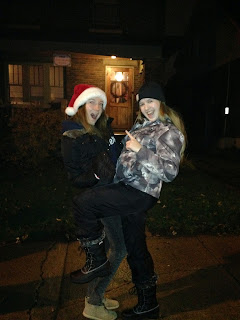 Sunday November 9th, Brooke and Fanny took a train to Toronto for the day.  Morning came early as the girls had to catch the 7:36 train.   The girls were up and eager to get going but not before we stopped to get them breakfast at Tim Horton's.  Canadians love their coffee and especially love their Tim Horton's coffee.  The average Canadian coffee drinker, drinks 2.7 cups of coffee per day.   So Brooke and Fanny got on the train and Lydia and I left knowing that our girls were getting older, more mature and that this was a great opportunity for them.  Brooke was given strict instructions to text at the key points of the day.  The first text came through at 10:15, it simply said "at the train station", followed 5 minutes later with "cab 1586 heading to  the ROM".

The girls went to the Royal Ontario Museum (ROM), grabbed lunch about 3 hours later then were back in a cab "cab 1844 heading to Eaton Centre".   Fanny and Brooke had a great time shopping with each girl buying a few items before Brooke sent another text, " walking to train station" followed by "at Union station".

The girls had went to Toronto on their own, took 2 taxis, visited the ROM, had lunch, went to the Eaton Centre, had dinner and navigated Toronto streets to make it back to the train station an hour before departure.    After a short burst of text messages 20 minutes before the train was to leave and one phone call,the girls found their train and were on their way home.

Tonight we had Amy over for a Raclette dinner.  We all ate way too much food and then for a late dessert we had Fanny's favourite,  Apple Crisp which Brooke and Fanny helped make last night. 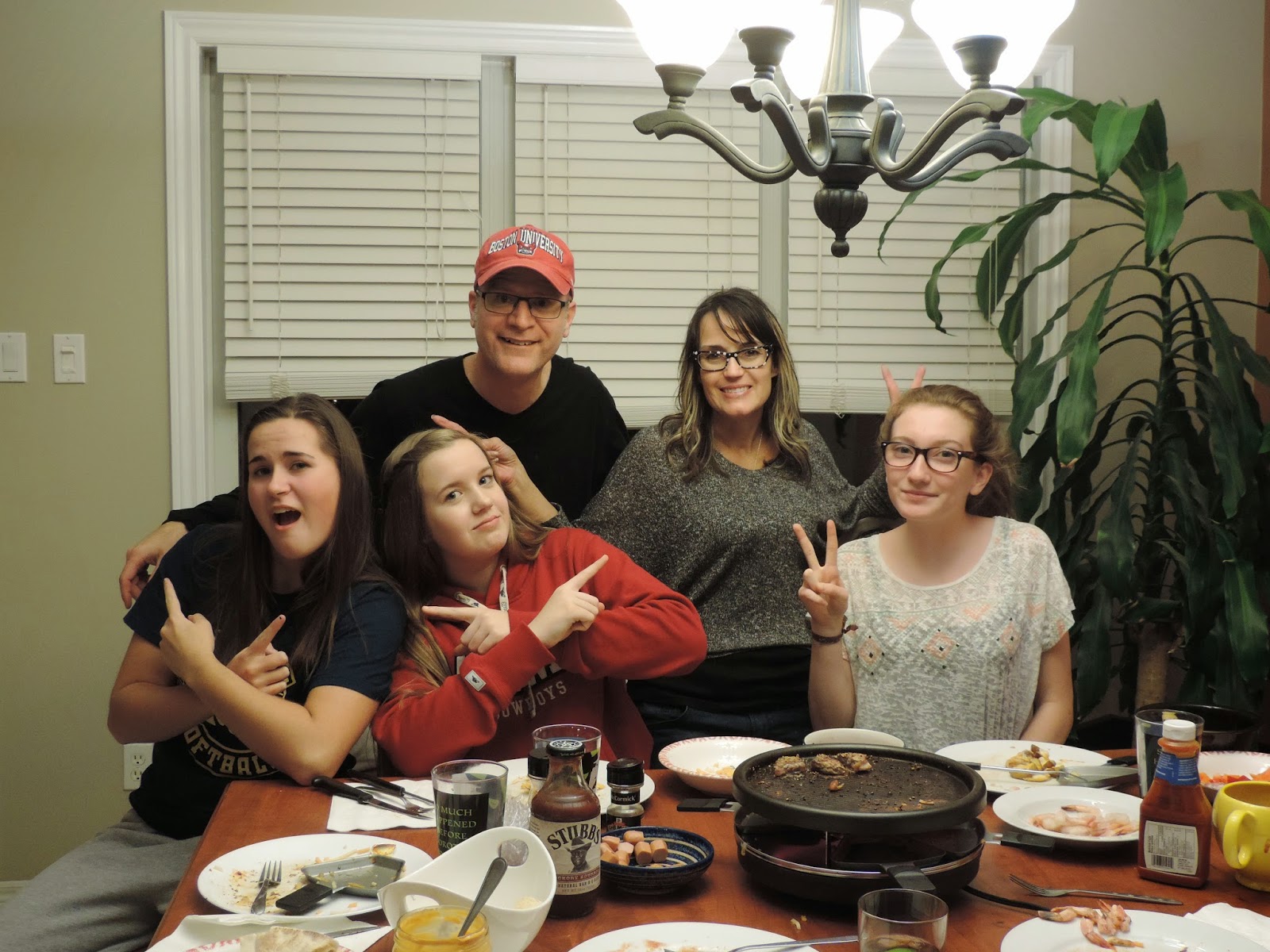 Soon our house will be a whole lot quieter but until Friday we're going to enjoy every minute we have with Fanny before she leaves. 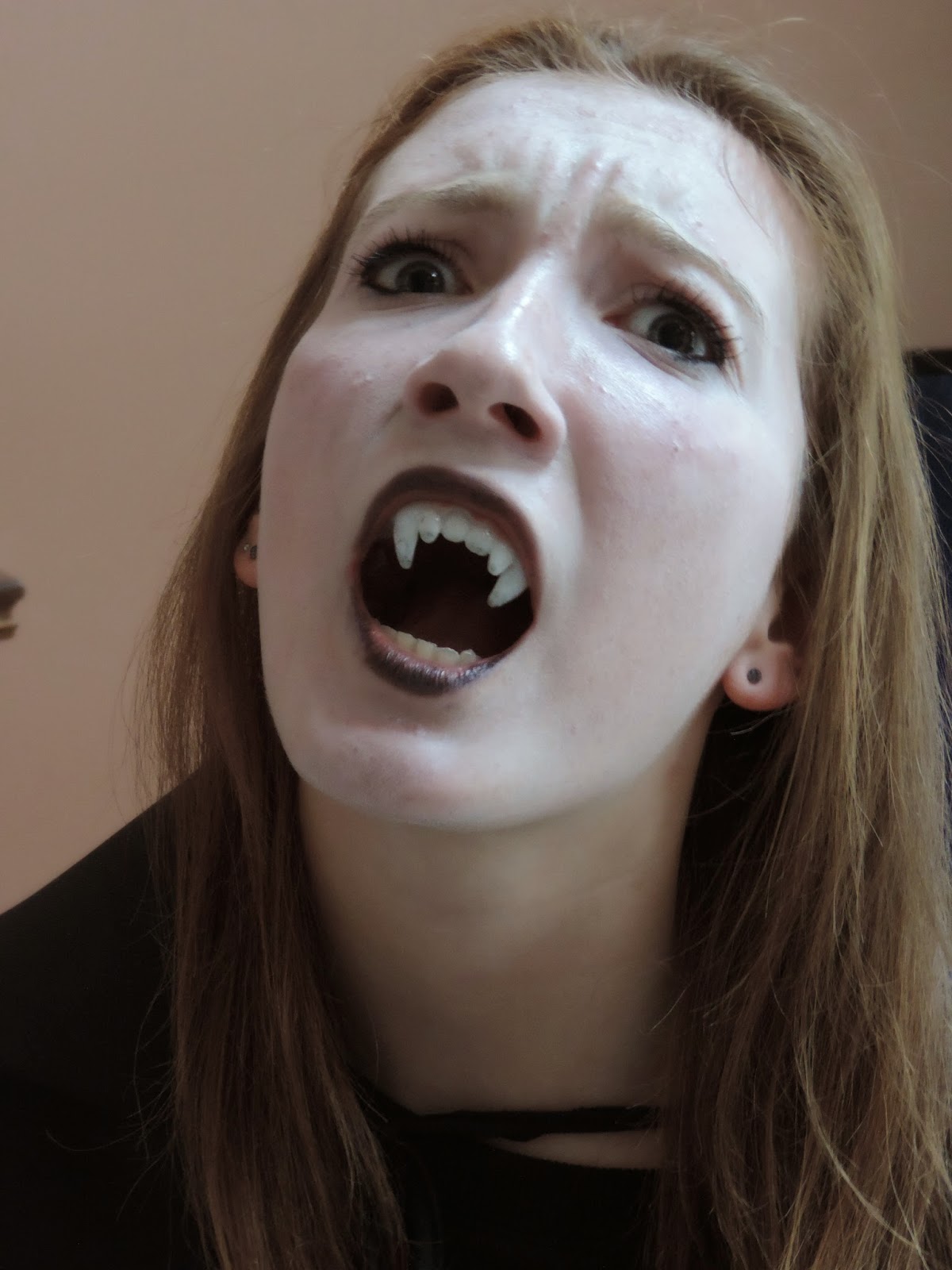 Halloween was extra special this year with Fanny here.  Having found out that France doesn't go as crazy at Halloween as North America does (Canadians spend 1 billion annually on Halloween, second only to Christmas) the girls had some fun doing such things as; 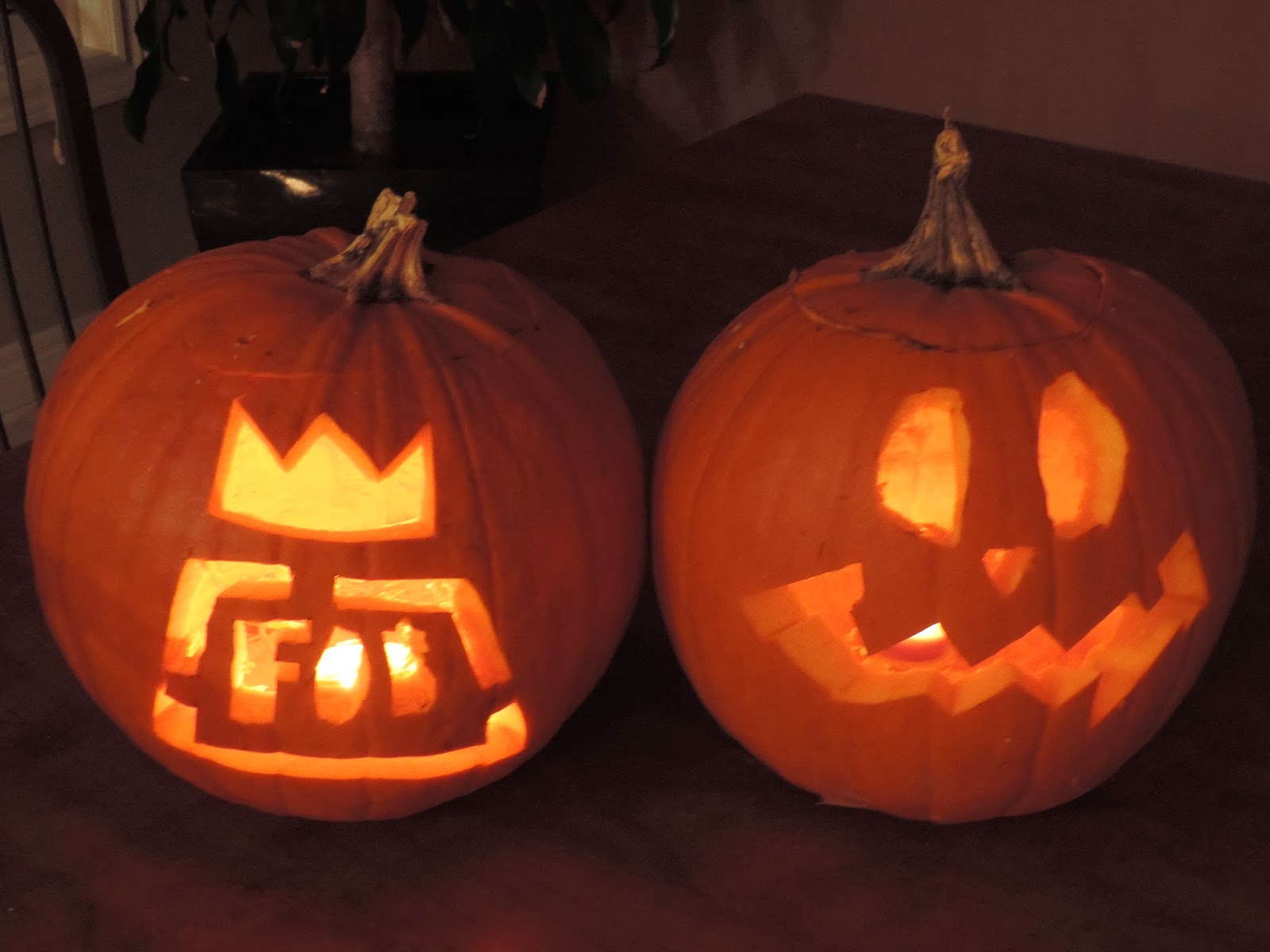 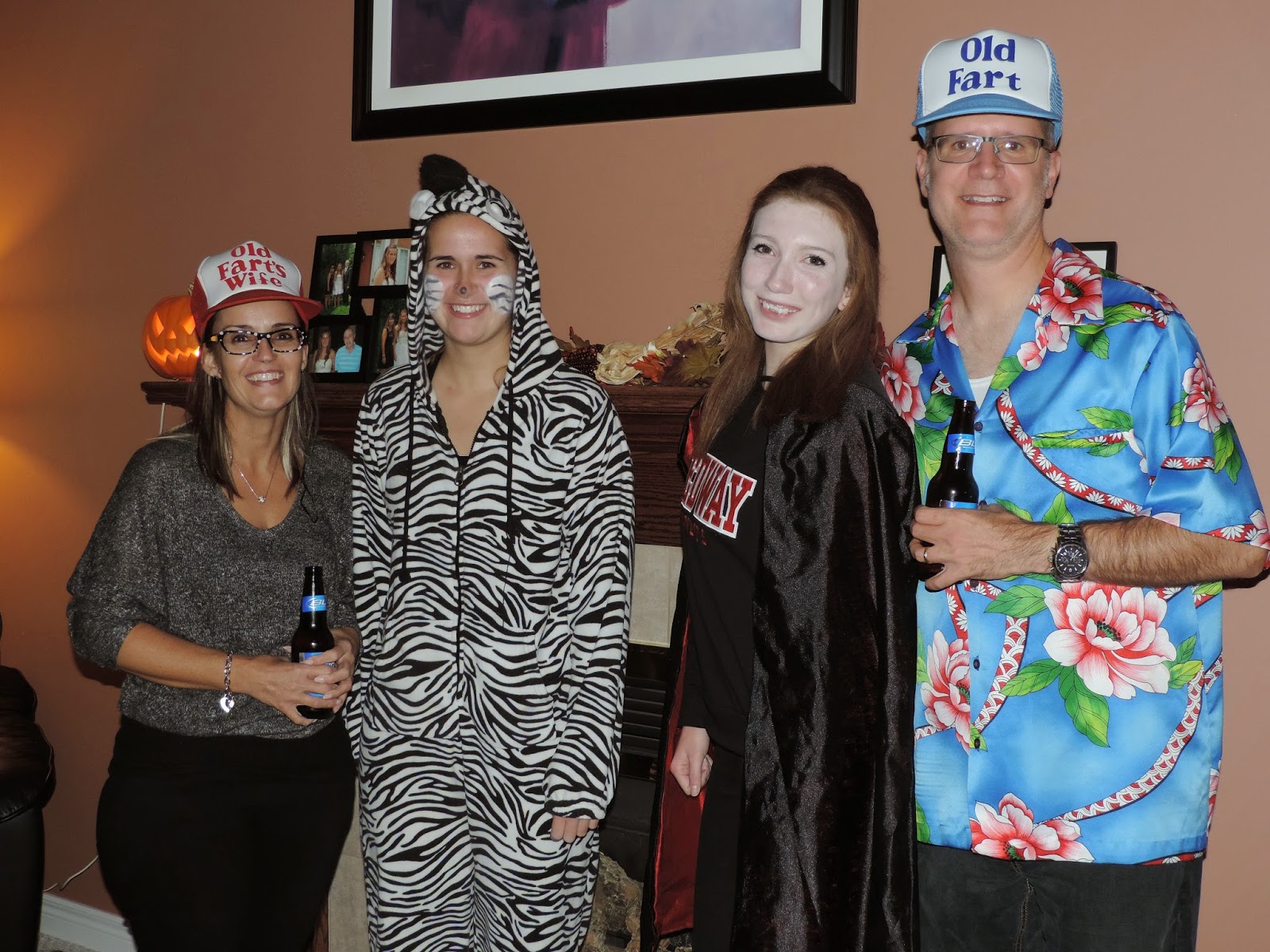 I couldn't end without commenting on our Monopoly game we played the other night.  Our "friendly" game of Monopoly turned into a ruthless but fun night of buying, selling and deal making.   Fanny informed us that at home her sister Florine who is 12 always wins well on this night it was all Fanny. She owned Boardwalk, Park Place, the 4 railroads and 2 utilities and once she added homes and eventually hotels we were finished. 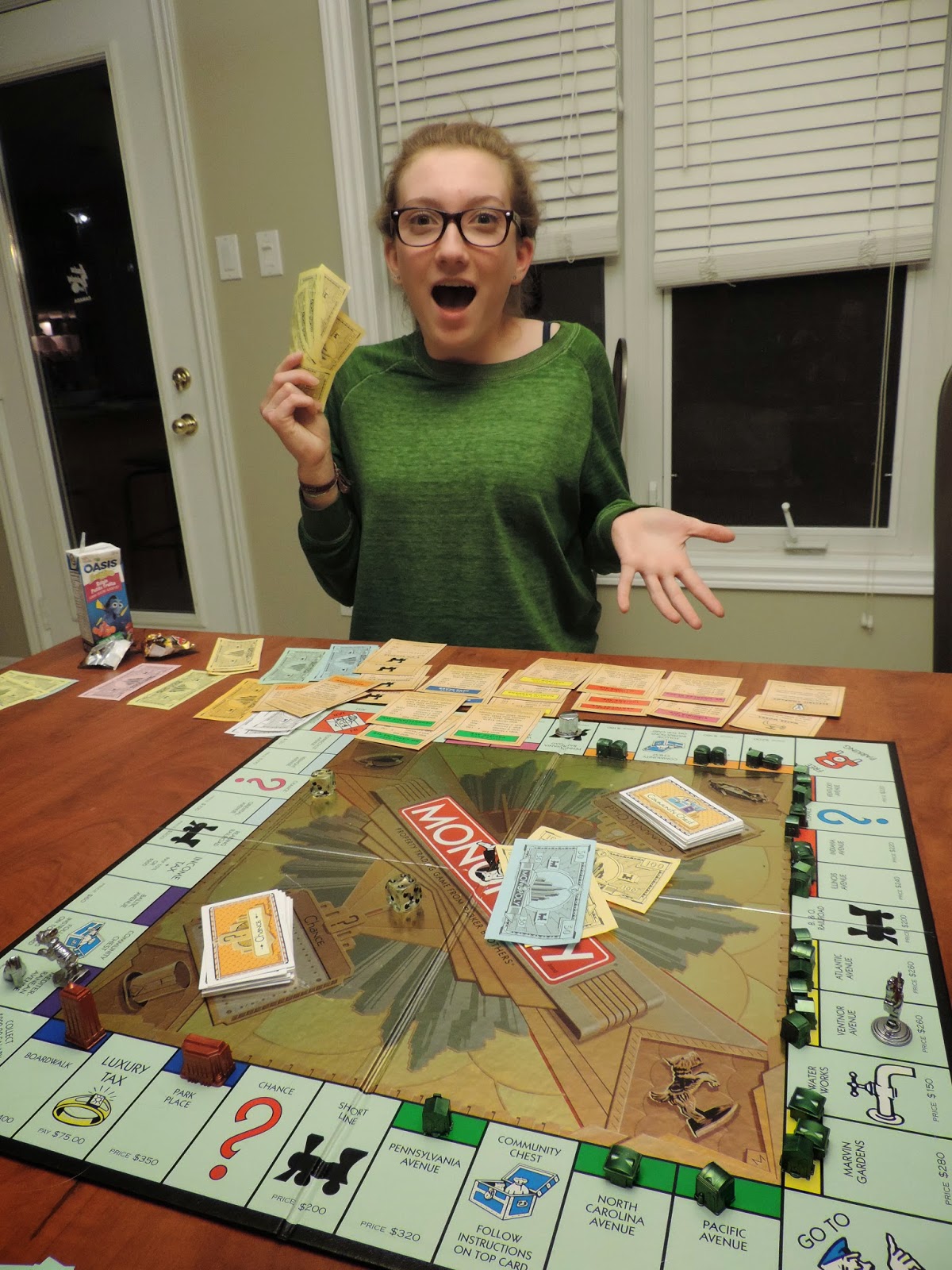 Lydia took the girls into London today to go roller skating at the North London Optimist Centre.   Anyone old enough to remember the 80's will remember rollerskating. 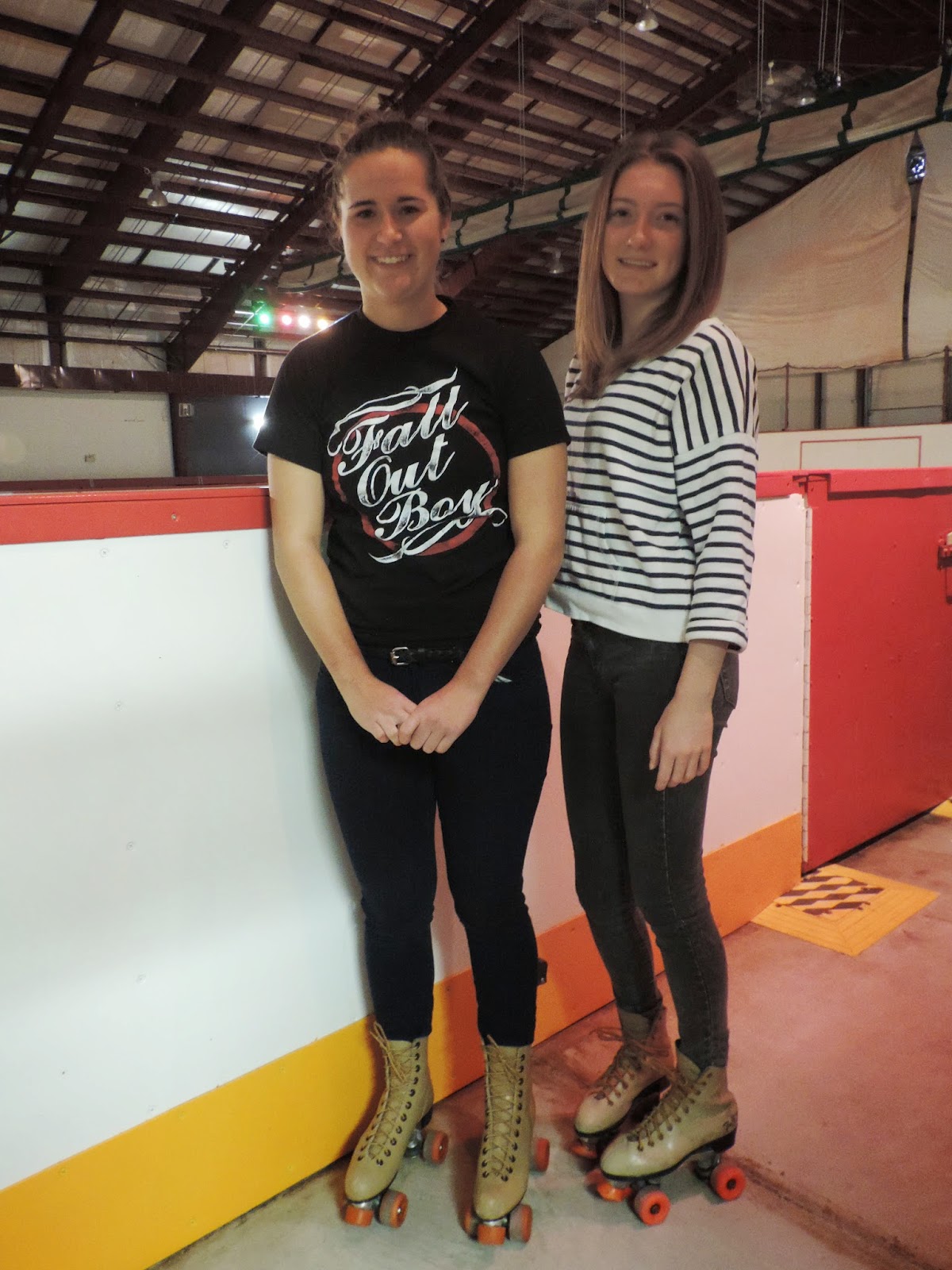 The girls had fun just like they always do together.   Lydia's dad Egon came over for a rib dinner and apple crisp that Brooke and Fanny made. 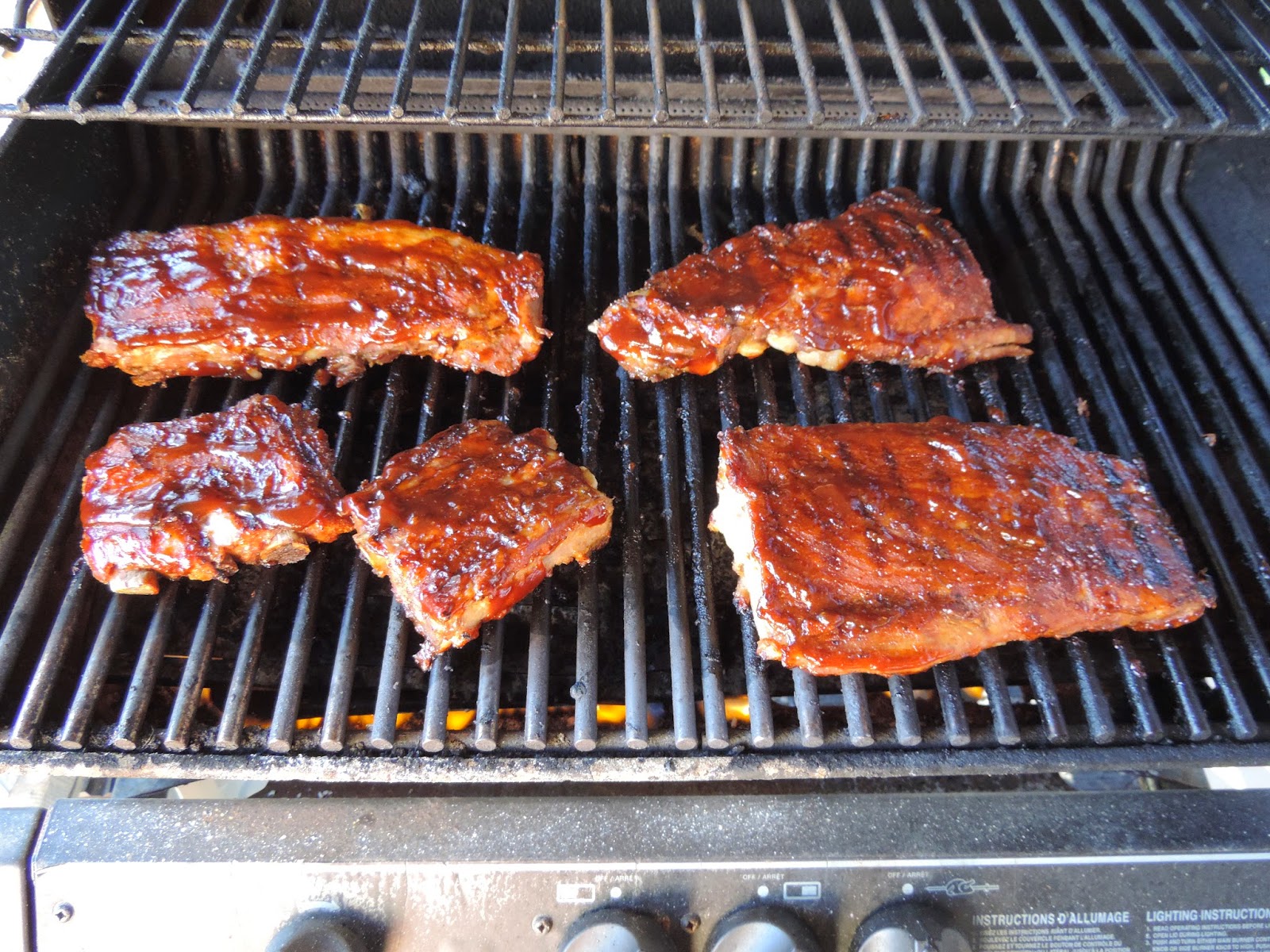 After dinner Brooke and Fanny built their Halloween ginger bread homes that Lydia had purchased earlier in the week.   Unfortunately Brooke's ginger bread was broken so well it looks a tad different than Fanny's.  See below.
Fanny's 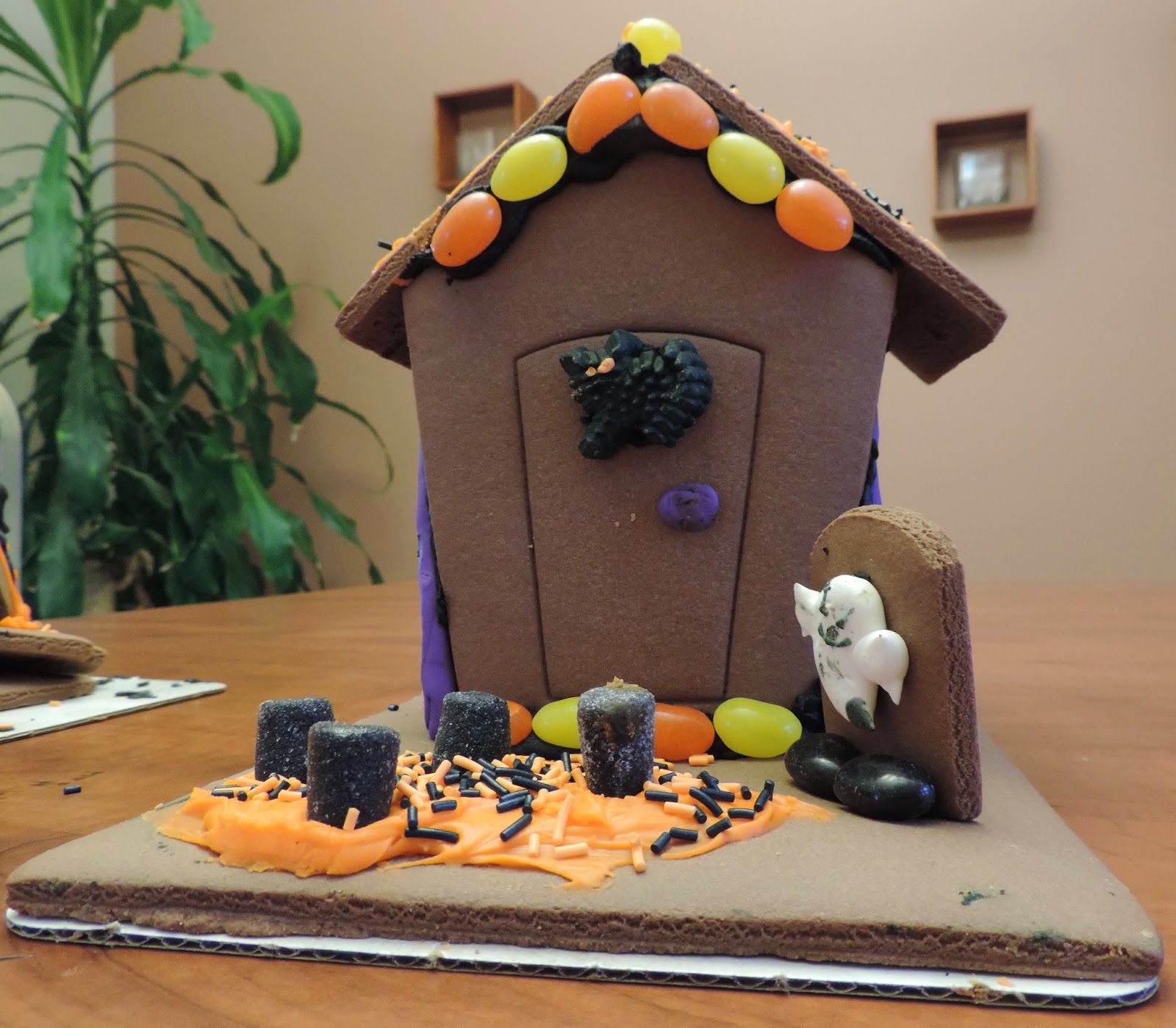 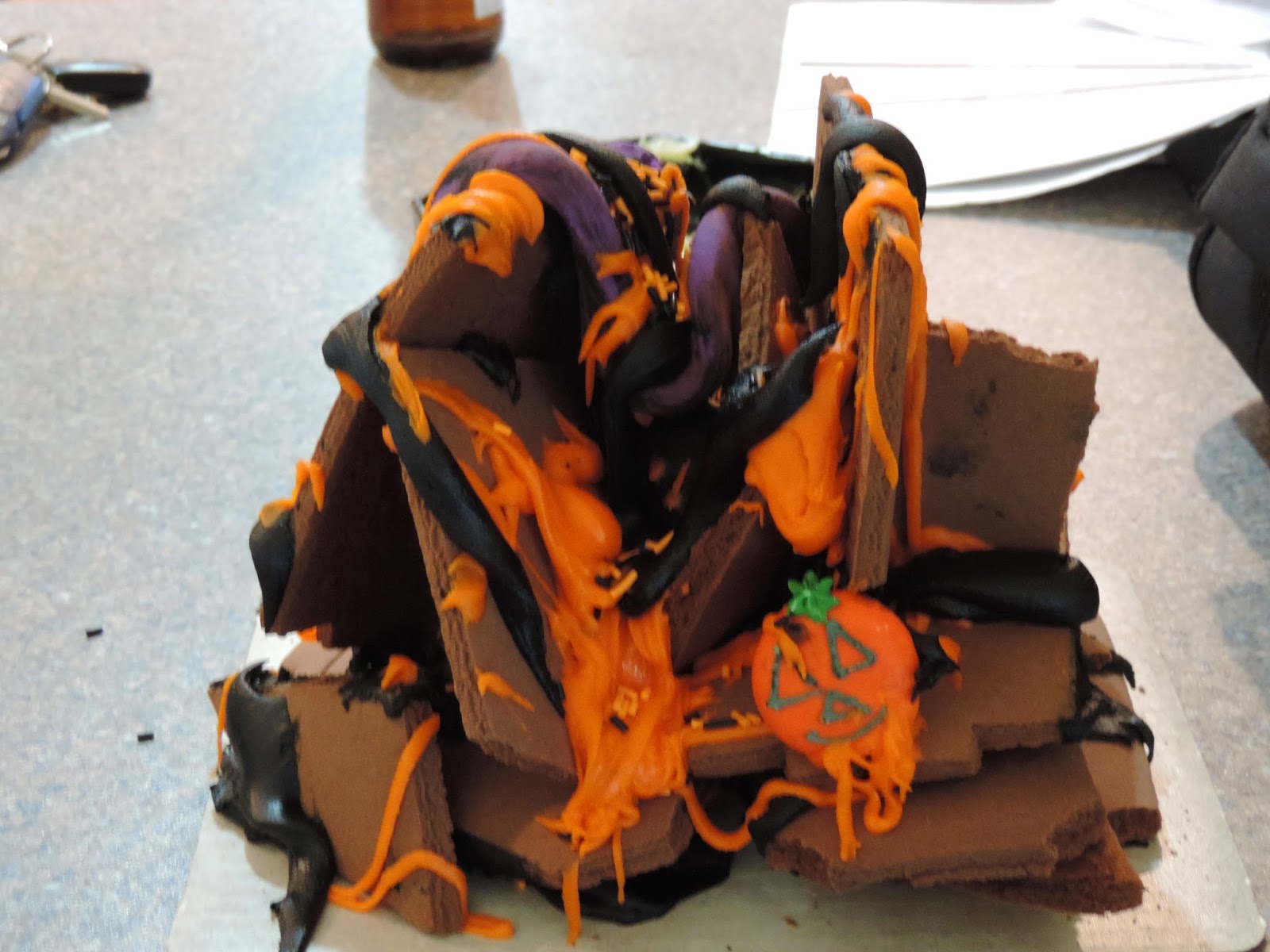 We're all still laughing about Brooke's creation.   Better luck next time Brooke!!
Posted by Unknown at 16:36 No comments: